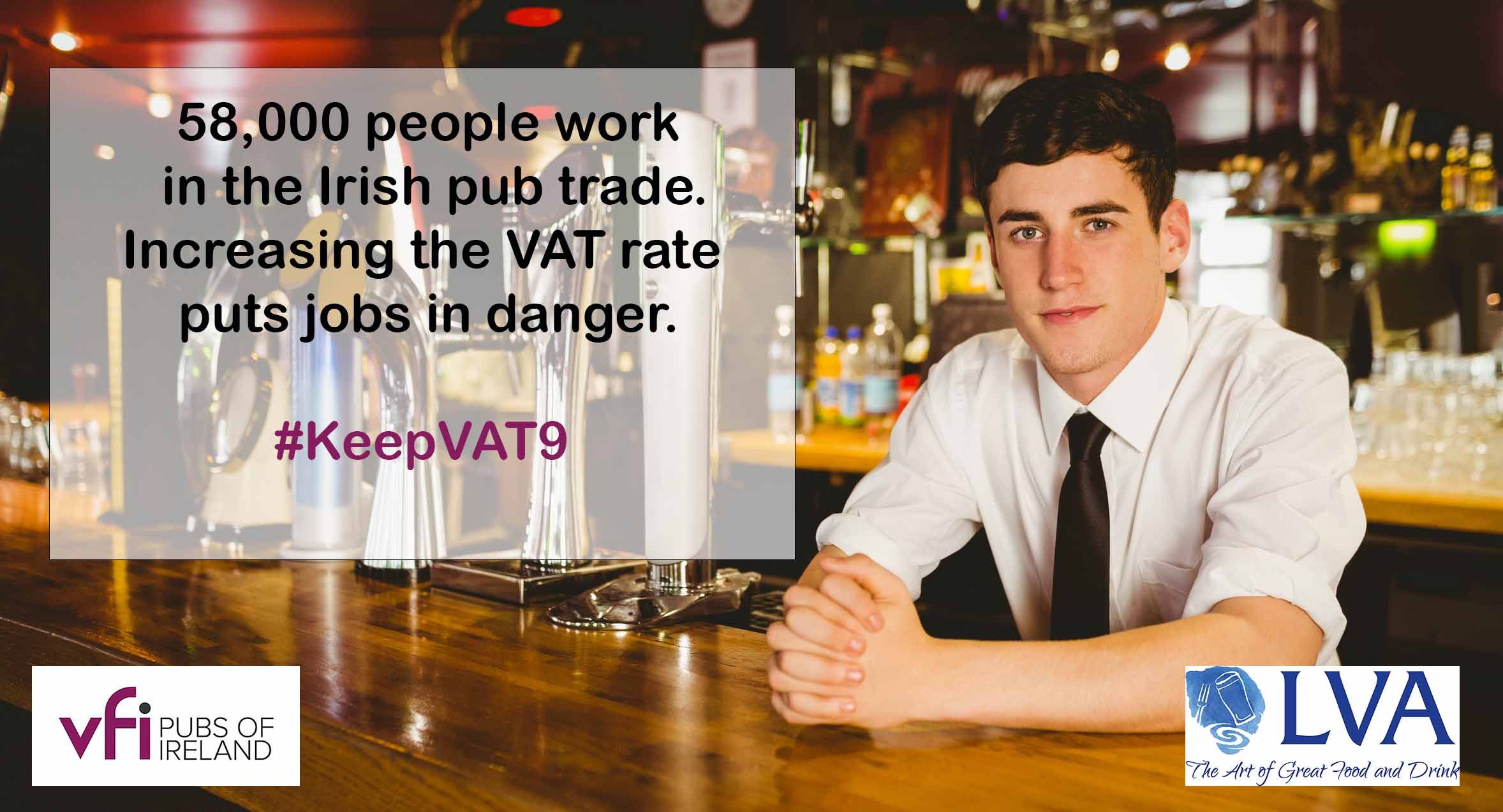 Any move to increase the hospitality VAT rate could do lasting damage to the growing pub food trade, impacting on pub jobs across the country according to the two groups representing publicans.  The Licensed Vintners Federation (LVA) and the Vintners’ Federation of Ireland (VFI) has called on the Government to protect these jobs by maintaining the 9 percent VAT rate ahead of the upcoming Budget.

Pubs are now the second most popular eating-out destination in Ireland, behind only Limited Service outlets (ie fast food, food to go) locations, according to research released by Bord Bia[1].

The broad focus for the upcoming Budget is expected to be on supporting the economy against any potential threats, including the implications of a hard Brexit.  At a time of such uncertainty in the market, publican bodies believe the present VAT rate should also be protected.  By increasing taxes on food the Government would be taking an unnecessary gamble, which would damage competitiveness in the pub sector. This will also have significant implications for the 58,000 people employed in the trade.

“Pubs across Ireland have worked hard in recent years to improve their food offering,” said Donall O’Keeffe, Chief Executive of the LVA.  “There has been sizeable investment made by publicans to improve their facilities, broaden their menus and employ additional staff.  As the Bord Bia research puts it, “Pubs are frequented for more than just drinking”.  Irish pubs are now regarded as providing good value food of the highest quality.  However that value will be put under severe threat if the Government were to increase the VAT rate.  It will have an immediate impact on pub food prices across the country.  It could do lasting damage our food service offering at a time when the sector is already under pressure due to Brexit. During this period we need consistency and we need to maintain our current food prices.  Any move towards increasing the VAT rate would be regarded as harmful to the pub trade and should be avoided,” he said.

Padraig Cribben, Chief Executive of the VFI said, “It is fair to say that during the recession, pubs across the country faced difficult times.  Some struggled to stay open, while many pubs went out of business.  To help increase trade they needed to diversify their offering, which lead to a strong improvement in food service across pubs.  Broadening the appeal of pubs helped generate more business, creating employment opportunities across the sector.  There are now approximately 58,000 people working in Ireland’s pub trade, with a significant portion of that number focusing on food service. There have also been employment opportunities generated by the increased numbers coming to pubs, thanks to the strong value food offering.  Increasing the VAT rate spoils that value, which will have a knock-on effect on the number of customers and the number of jobs available.  The solution is simple, maintain the current VAT rate and protect Irish pub jobs.”

Both the LVA and the VFI also highlighted the extraordinarily high levels of excise taxes already being applied by the Government across the Irish drinks’ sector.  This is the focus of the ‘Support Your Local’ campaign for 2018 with the industry seeking a reduction in these high taxes.